There is a point about half way through the Erie Canal where you can branch off in a northerly direction towards Canada. This route is called the Oswego Canal which involves a series of 8 locks bringing us down to the level of Lake Ontario. At the last lock, we completed our day by tying up to a concrete wall that ran the length of the waterfront of the town of Oswego. That evening, we took a long bike ride through the village and down the canal trail way, then enjoyed dinner and live entertainment with some other couples at an outside cafe overlooking the ocean-like expanse of Lake Ontario. Our time at dinner was an opportunity to discuss the plans for venturing out onto the Lake for a eastward approach to the mouth of the St. Lawrence River with the idea of spending time in the Thousand Islands. After many long days in narrow canals and locks, we were looking forward to cruising in some open water.

The next morning was overcast as we cruised out of the canal, passing the Oswego Lighthouse and into the expanse of the Great Lake. The surface of the lake resembled a mill pond that day. It was so slick that is was hard to detect the line of the horizon. We could look back and see our wake trailing behind us for miles. It was a very relaxing 5 hour, 30 mile cruise east toward the village of Cape Vincent. We stopped at a free city dock for the night, a place where we could look down through 20 feet of crystal clear water and see the bottom! It was a beautiful sight after spending so much time in the swift moving and muddy waters of the New York canals.

After a nice overnight stay in Cape Vincent, we cruised to Clayton, remaining on the U.S. side for 2 more days. Clayton was one of our favorite stops so far, featuring one of our country’s best maritime museums. This community thrives on the love of boating and the art of boating craftsmanship. Classic wooden boats are everywhere and are understandably in good condition, considering the fact that they live under beautifully constructed boat houses and sit in pristine fresh water only 3-4 months of the year. During the winter, these boat lovers are dealing with ice that is 2 to 3 feet thick across the full width of their river. I have become very thankful for the boater-friendly climate of South Carolina, but it sure is nice to be in this part of the world in the month of June!

We spent several days in the Thousand Islands area of the beautiful St. Lawrence River. While aboard a guided tour boat which took us around small islands where the wealthy of the “gilded age” built their mansions and castles, we learned much of the history of this area. During our visit to the Boldt Castle I even learned the origin of the name of my favorite “Thousand Island” salad dressing! George Boldt, a penniless immigrant, had worked his way up through kitchens of Philadelphia and New York hotels until he became the proprietor of the famous Waldorf-Astoria Hotel. Having amassed a fortune, he bought an island after falling in love with this area. He began building a replica of a Rhine Castle for his beloved wife, Louise. (Apparently he introduced and named this salad dressing and introduced it at his hotel – along with the “waldorf” salad.) The story ends sadly when Louise died suddenly and he halted construction on the castle, never to return to the island. After years of neglect, vandalism and exposure to the weather, the historic castle was purchased by the Thousand Islands Bridge Authority and major renovations have been done. It is the number one attraction in this area now. 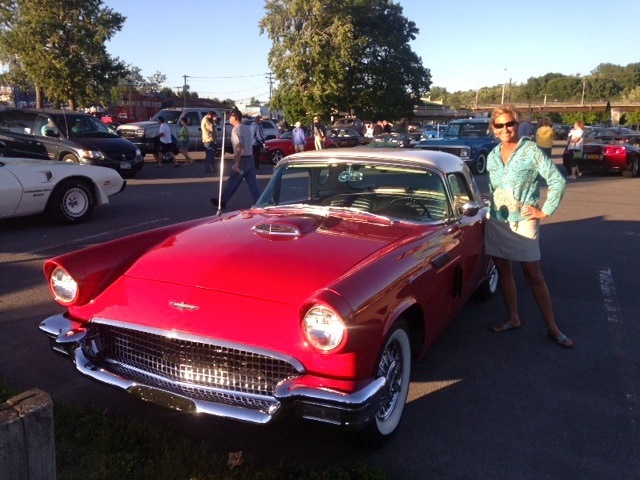 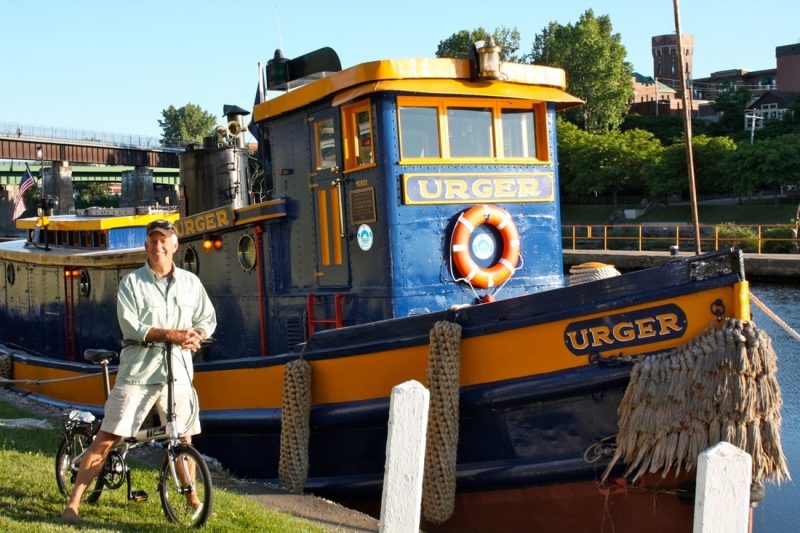 If you are cruising too slowly, there is always someone who can urge you along. 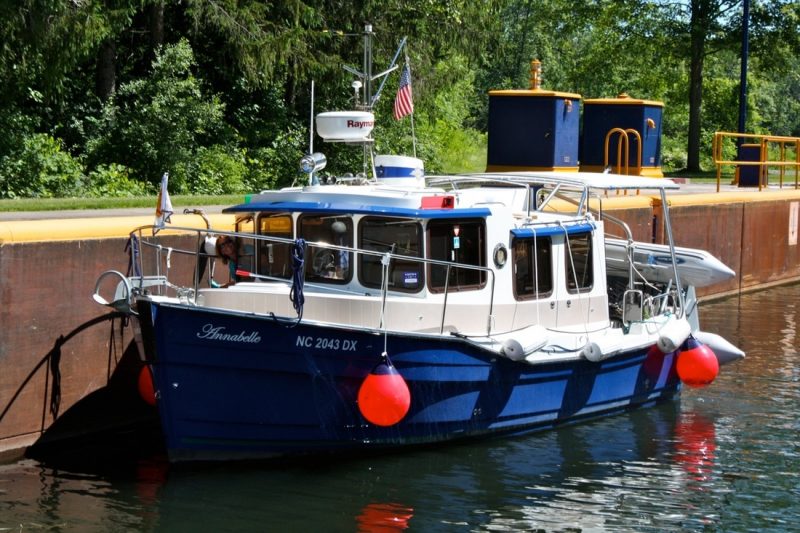 Our North Carolina friend, Tanya, who is cruising the loop single handedly! 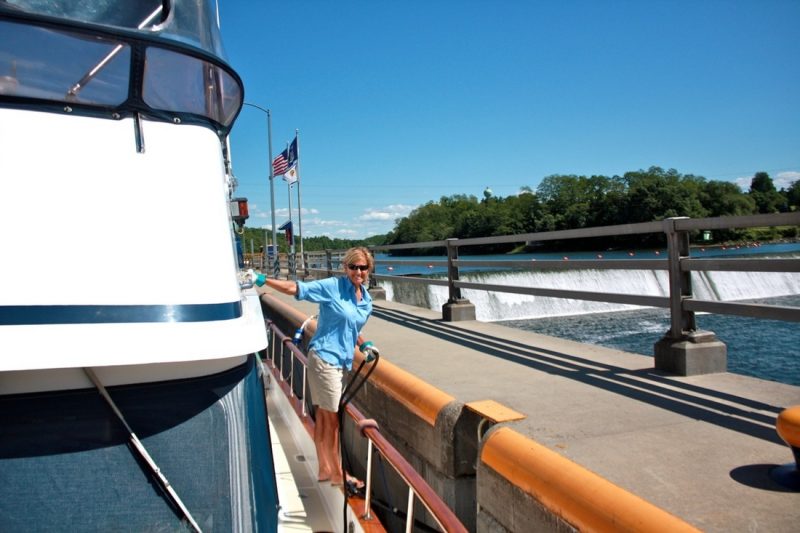 Stel has become quite comfortable with the locking procedure as we go through our last U.S. lock 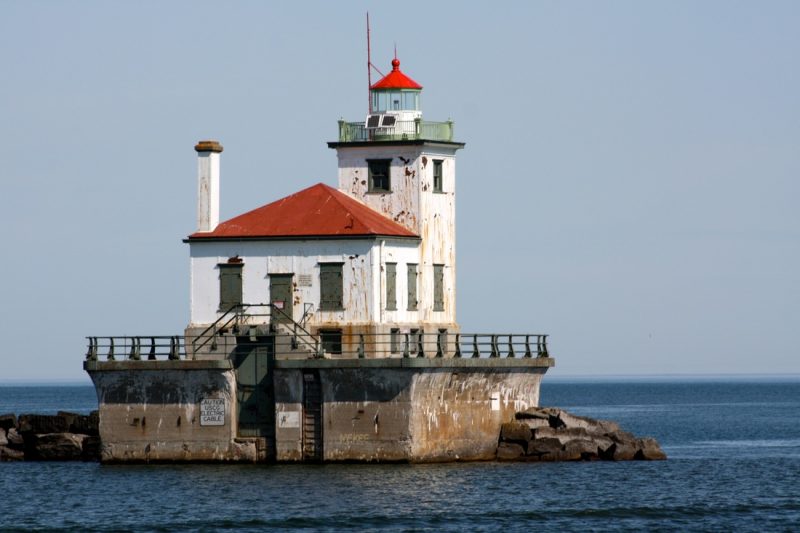 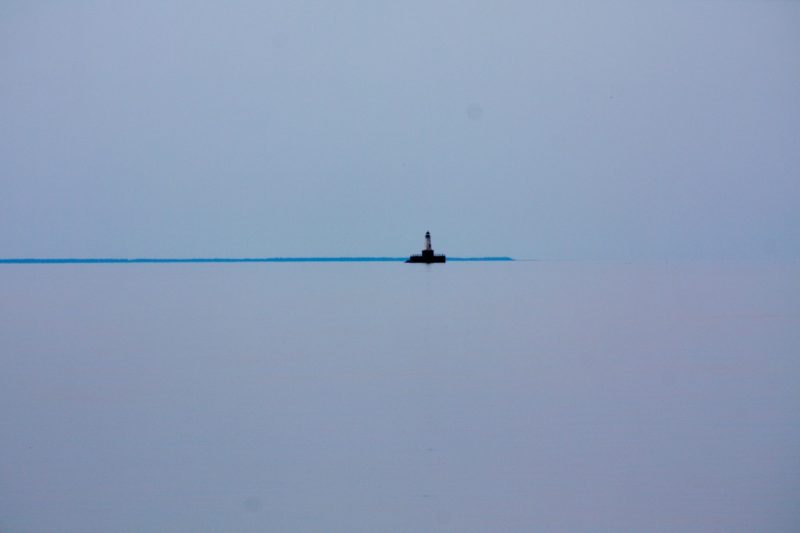 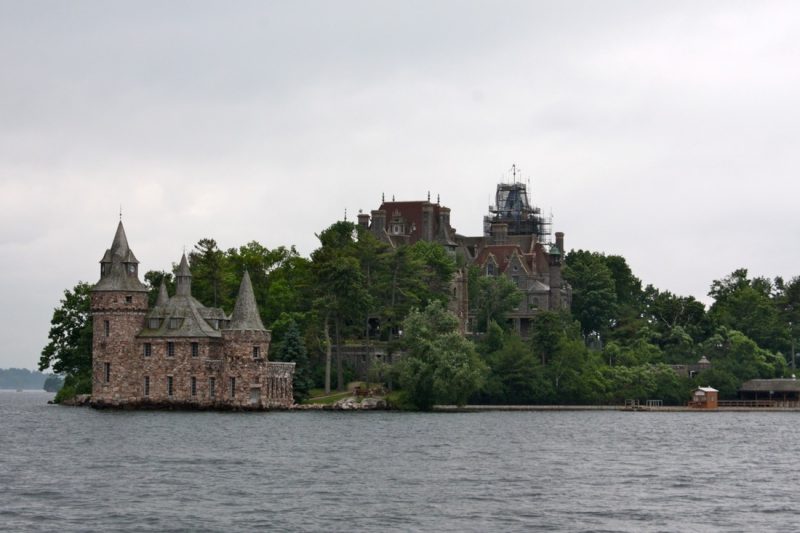 Our approach to the Boldt Castle 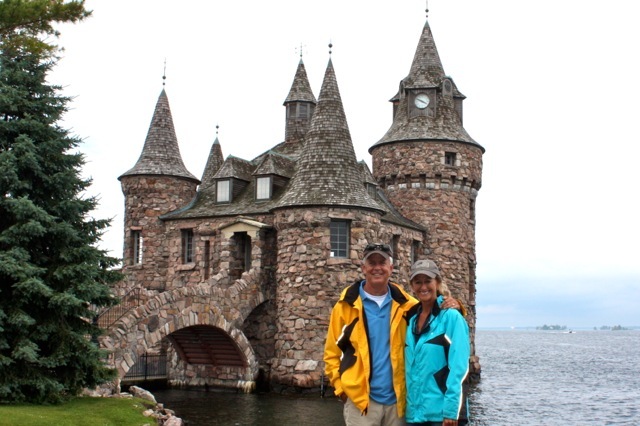 This is the kid’s playhouse at the Boldt Castle, complete with a theater and bowling alley 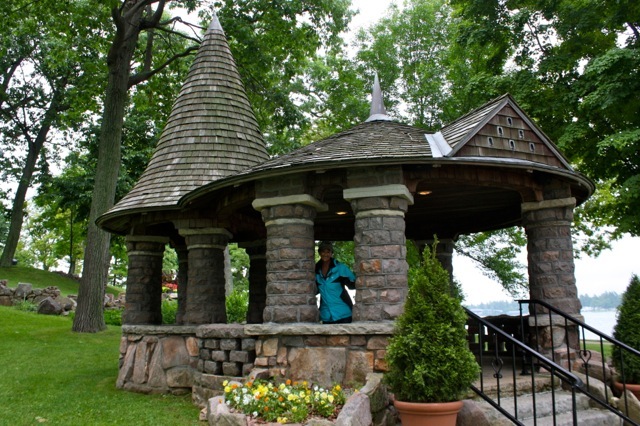 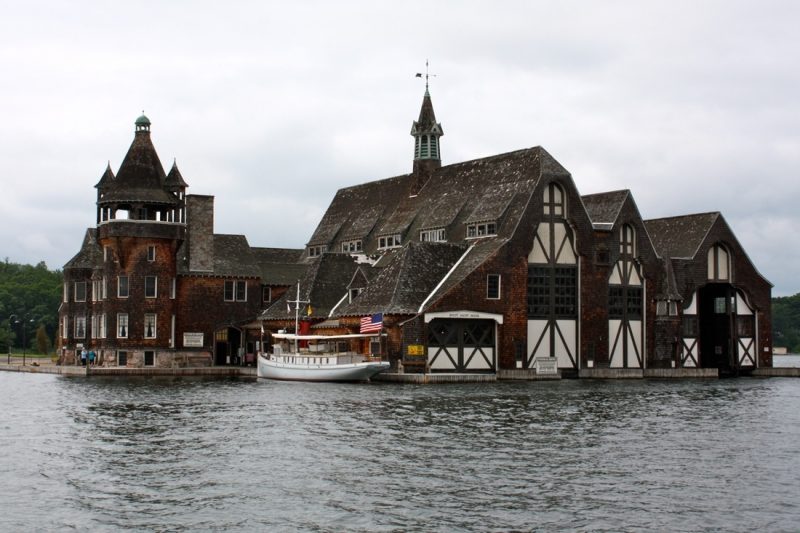 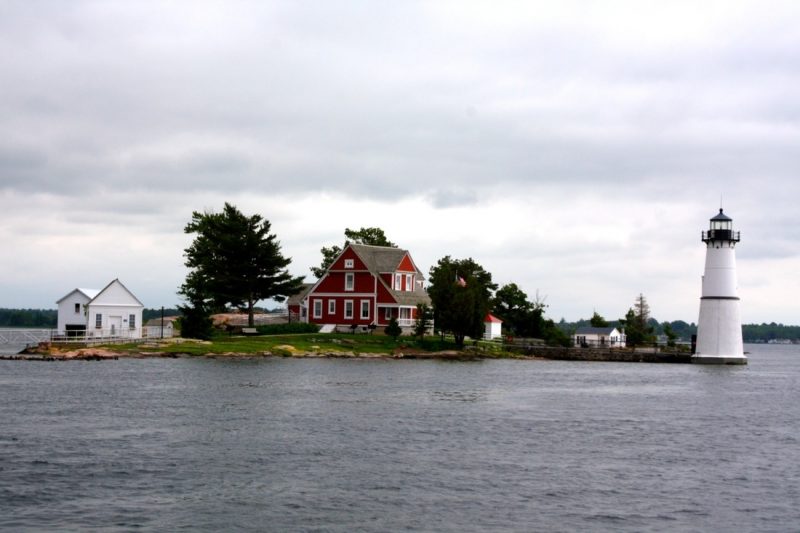 Great island property, but tough at night with the light shining in your bedroom window 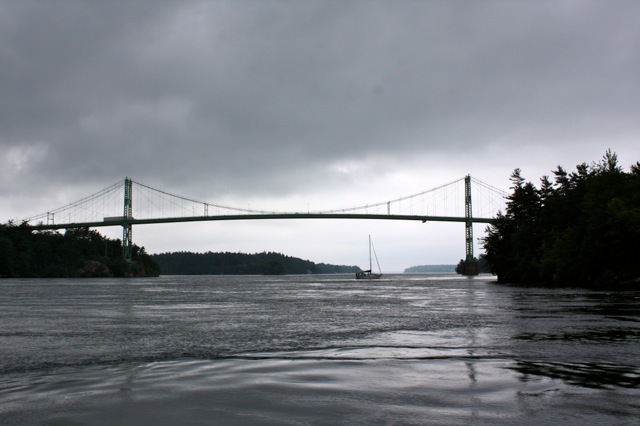 The Thousand Island Bridge from U.S. to Canada 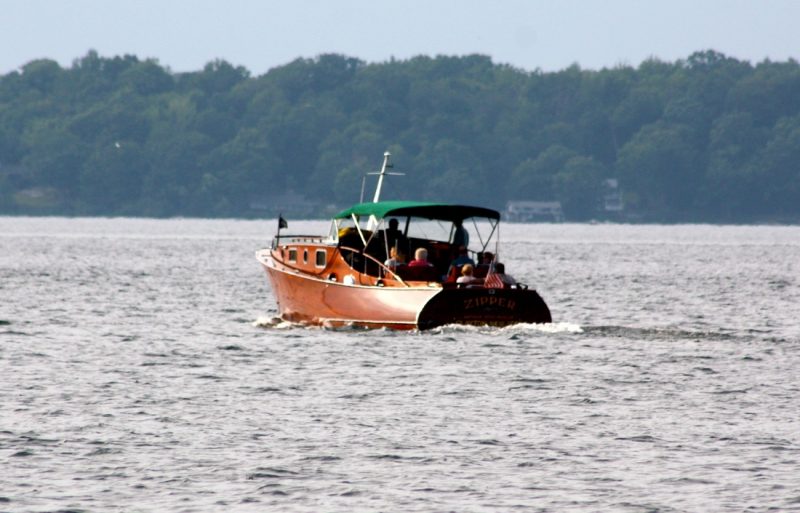 And then there are boats for the more practical minded folks. 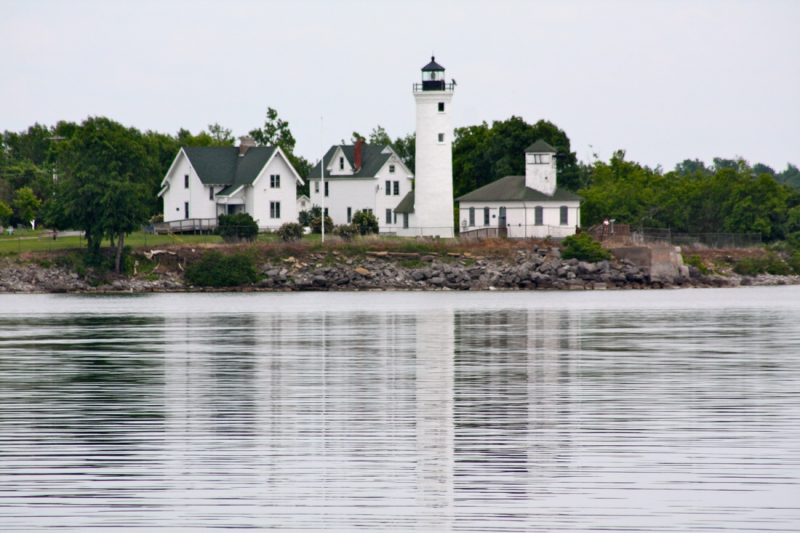 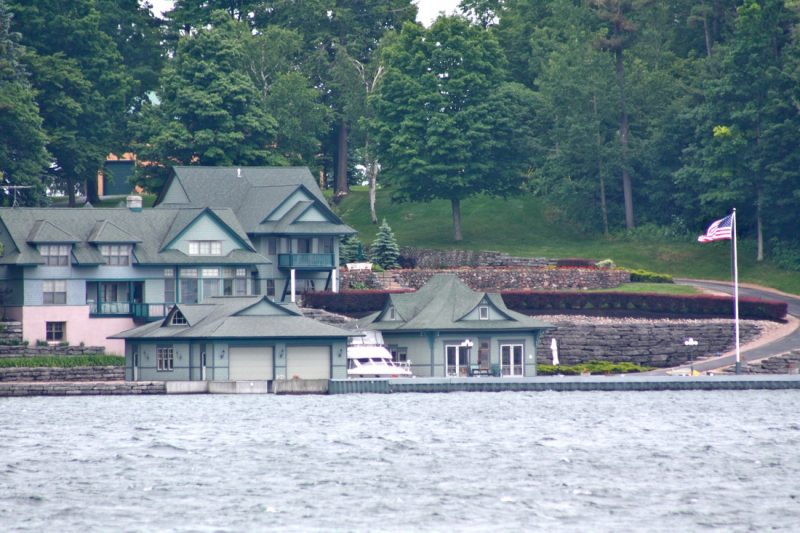 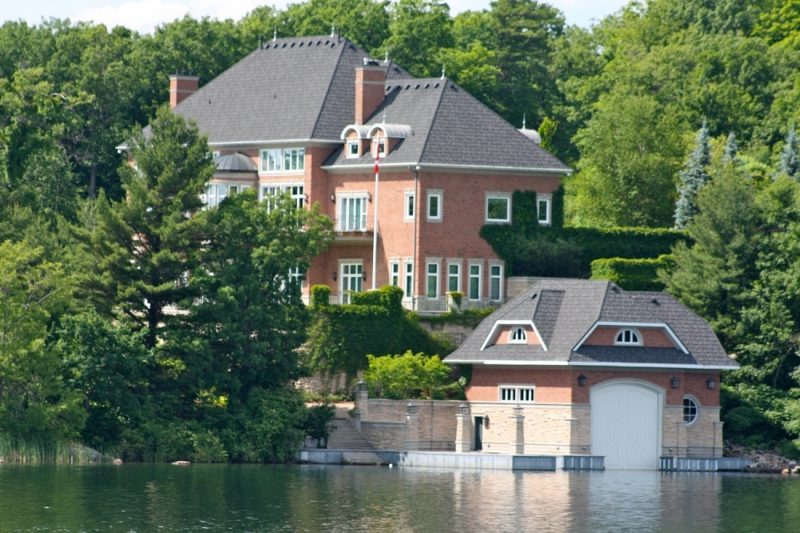 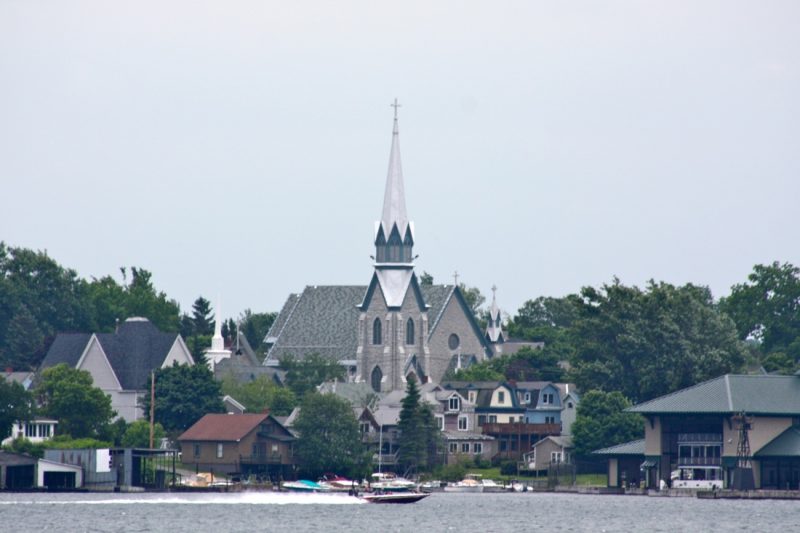 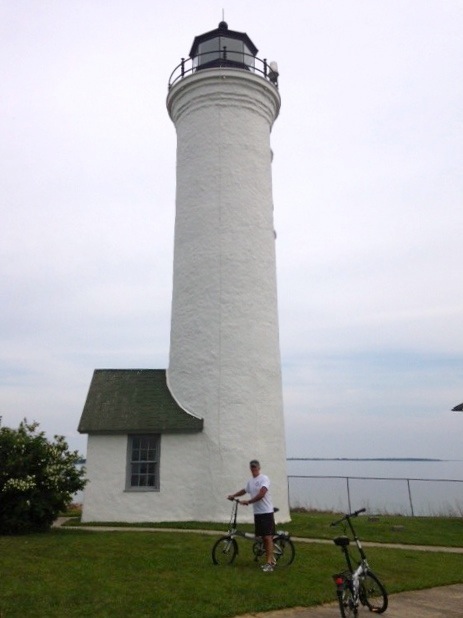 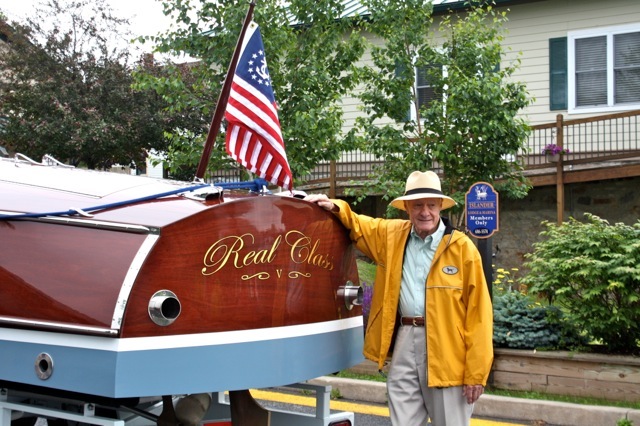 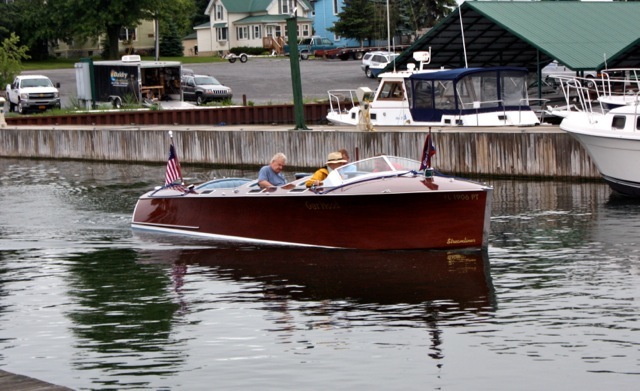 We watched from our boat as he took the wheel of his brand new Gar-Wood triple cockpit cruiser for the first time.